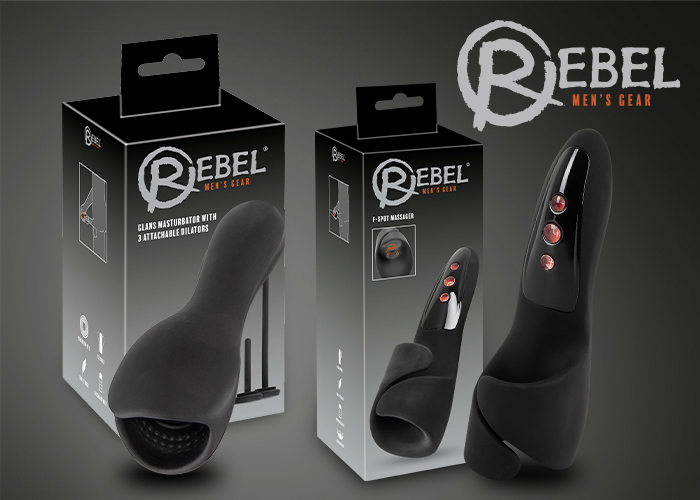 The sex toys from REBEL have a distinct, manly design and have been created specifically for men. Two new products have now been added to the extensive REBEL assortment: a special masturbator and a glans stimulator.

The “F-Spot Massager” (item number 05520700000) provides magnificent stimulation with ten vibration modes in three speeds and one additional throbbing/pulsating knocking function directly on the sensitive frenulum. The frenulum, also known as the F-spot, is one of the most erogenous areas of the penis apart from the glans. The frenulum is an elastic band of tissue that connects the soft foreskin at the bottom of the penis to the glans. The F-spot is not an actual spot, but a 1-cm long band of tissue with a lot of nerve endings. Precise stimulation of this band of tissue is said to lead to very intense orgasms. People with erectile dysfunction can also reach an orgasm this way. The “F-Spot Massager” is waterproof and makes hot moments during a cold shower possible. It can be recharged with the included USB cable.

All the REBEL products are delivered in a high-quality cardboard box that also has a description of the product in various languages on it as well. The packaging can also be stood up or hung up with the hanger in the middle. More products will now fit into the sales space because they’re more compact. They also take up less space when they’re in storage as well.