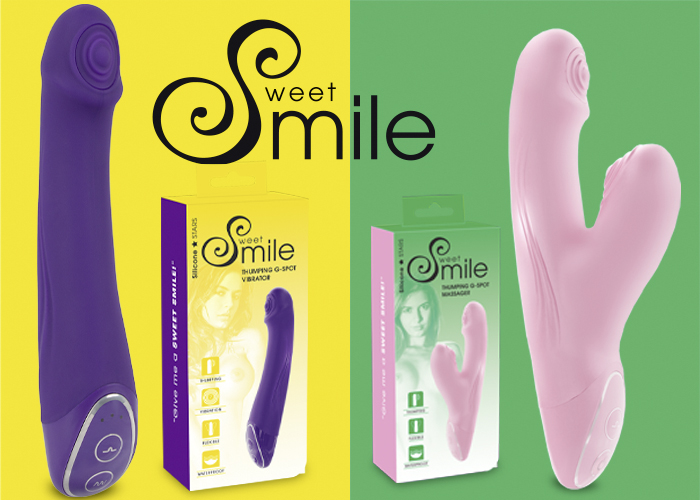 The G-spot is one of the most popular pleasure spots of a woman. It is reportedly located about three to five centimeters behind the vaginal opening near the urethra and it can – when stimulated properly – cause extremely intense orgasms.

The flexible “Thumping G-Spot Massager” from Sweet Smile (item number 05523640000) stimulates in a very similar way because it has an innovative knocking function in the wonderfully curved G-spot tip. This exclusive model also has a knocking function in the additional clitoral stimulator as well. It has two motors for eight pulsating knocking modes that can be easily controlled with the button on the toy. The “Thumping G-spot Massager” is also covered in a soft touch texture which feels great against the skin during stimulation. It is also waterproof and can be recharged with the included magnetic charger.

The sex toys from Sweet Smile are delivered in a cardboard box that has a description of the product in various languages on it as well. The box can be easily opened and closed because it has a magnetic fastener. The toy can be seen inside the eco-friendly cardboard tray once the front of the box has been opened. The sustainable packaging contains almost no plastic. There is just a small plastic insert inside the packaging for hygienic protection and it is not glued to the box. This means that the cardboard and plastic can be separated very easily. The packaging can be stood up or hung up with the hanger in the middle. More products will now fit into the sales space because they’re more compact. They also take up less space when they’re in storage as well.