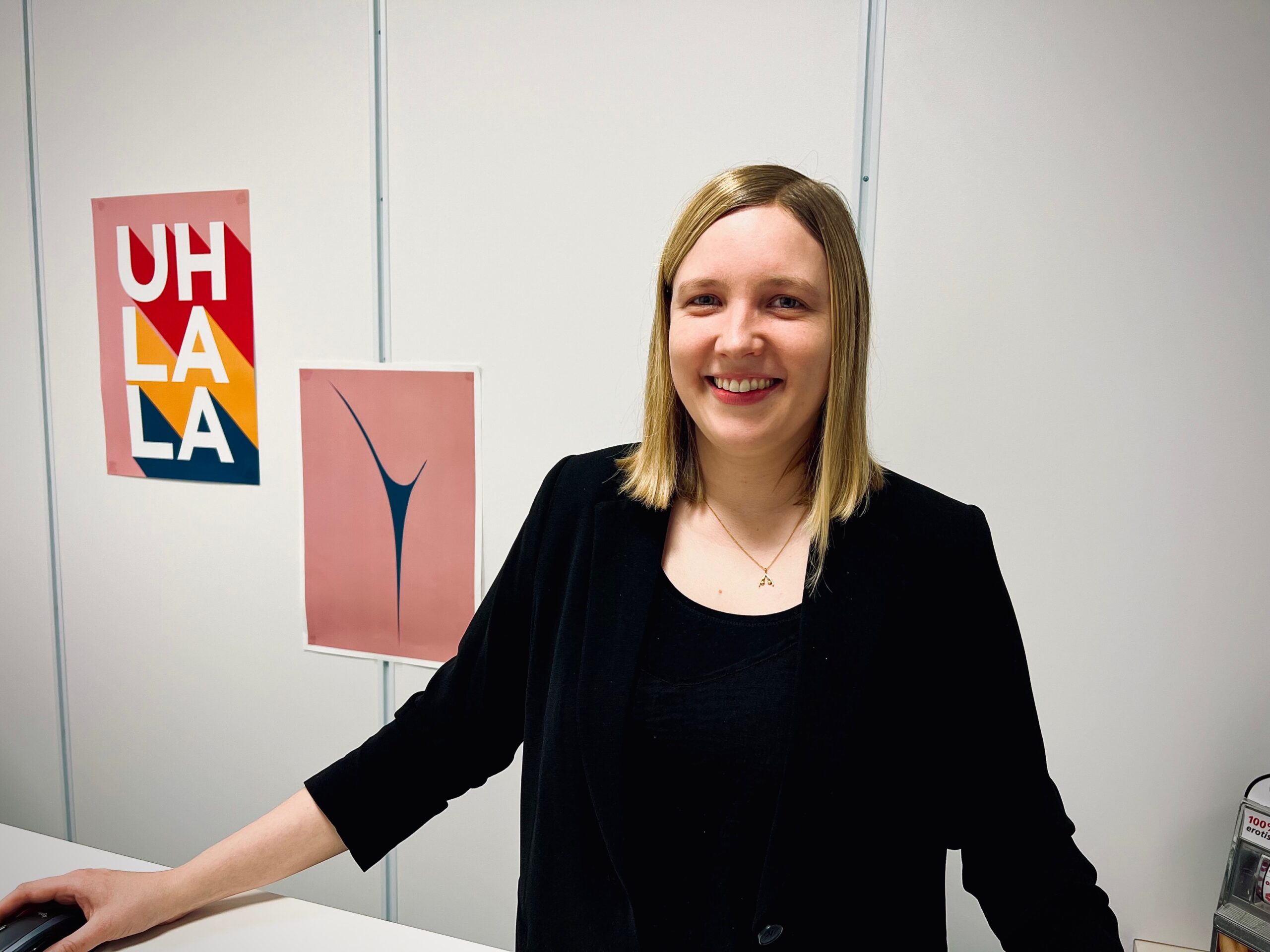 Home / Press archive / Why TikTok is almost a bit like surfing

Jenna Hinrichsen is our social media manager and has been responsible for our presence on Instagram and Facebook for a long time. A TikTok account was added about a year ago. We wanted to know what her experiences with this platform have been so far and why TikTok is worthwhile for a company like ORION.

Hi Jenna, ORION has been on TikTok for an entire year now. How did it come about that you also brought this platform into the social media fold?

It was, of course, particularly appealing that TikTok is the place to be at the moment. Compared to Facebook and Instagram, very large audiences can still be achieved there. After all, according to TikTok, users spend an average of 89 minutes a day on the platform and consequently scroll through many videos…

But we were also impressed by the uncompromising authenticity of the videos published: We’ve been releasing very personal posts on Instagram and Facebook on the topic of sex education with our colleagues for some time now. Extending this work to TikTok was simply the next logical step.

TikTok is a platform for short videos, which has its roots in the Chinese app Douyin that Bytedance released in 2016. A year later, TikTok was released as a counterpart to the Chinese app and in 2018 merged with the lip-sync platform musical.ly.

With TikTok, users can record short, self-made videos and add music to them if they want. The app offers a wide range of effects and filters for making creative videos. The uploaded videos are then evaluated by the algorithm and matched with the users’ interests. In this way, videos that match the interests are played. This feed, which is controlled by the algorithm, is also the main difference to Facebook and Instagram: With the latter, the focus (at least until now) has been more on the community and posts from friends and other followed accounts.

In other words, you can follow other users on TikTok and interact with them through comments or duets – but the focus of the app is the videos and the news feed with the recommendations of the algorithm. The number of followers, on the other hand, is not so important on TikTok, but rather that you post something as often as possible in order to jump on the next viral wave again as quickly as possible – almost a bit like surfing…

Another major difference is that there is exclusively video content on TikTok, whereas on the other platforms other types of content are also possible. These videos are fast and the content has to be convincing from the very first second, otherwise the users will move on and that’s it for the post!

What was your first post on TikTok? What worked well and what would you do differently, knowing what you know today?

This “test run” was a complete success – our post caused a lot of laughter and brought us 320,000 views in one fell swoop. So, I wouldn’t do things much differently today. Of course, we evaluate the KPIs of the videos professionally and use them to see which formats we should keep and which ones we don’t want to repeat again. But it is also very important for us to try out something new and intuitive every now and then: maybe different video lengths, or key facts about ORION, or perhaps life hacks. That simply makes our posts more exciting and creative.

TikTok is generally considered to be very young and has long been treated as a fun platform. Why is it still worthwhile for ORION to have an account there? And do you also advertise on there?

TikTok’s audience isn’t as young as many people think anymore. We actually reach a similar core target demographic as on Instagram with our posts – namely users between the ages of 20 and 30. On Instagram, the age group tends to go upwards – on TikTok, it tends to go downwards.

TikTok stopped being a pure fun platform a long time ago. More and more companies are discovering the platform as a way to reach a younger target audience. Why exactly has it now paid off for ORION to get onto TikTok? I have already mentioned two very important aspects: At the moment, it’s still relatively easy to increase the amount of people we reach compared to other platforms and our goal to educate. Additionally, this format is almost perfect for breaking social taboos in a charming way and for a personal and human look behind the scenes.

However, it should always be noted that all these branding effects are based exclusively on a purely organic reach. Paid advertising is great but hardly feasible for companies like ORION – neither via Google nor on social platforms. This is because ads for toys, lubricants or even certain lingerie are no longer allowed, or only allowed to a very limited extent.

Why is that? In the USA, there was the SESTA/FOSTA initiative, which led to the passing of a new law in 2018 aimed at stopping sexual trafficking on the internet. In itself, a great thing. However, with this law, the legal protection of website operators in the case of violations by third parties was removed, which is why the platforms are increasingly censoring all content that deals with topics related to sexuality. Some of this affects the topic of sex education – but above all our products.

For us, this means that we have to be particularly creative and retain customers through alternative means other than paid advertisements. And even with organic content, we have to be careful about what we say or show. That’s why we censor so many words and images that could potentially be blocked on the platforms.

But, whether it’s TikTok or another social platform, we take on the challenge and don’t let these restrictions get us down. So far, it’s been working quite well ;).

Can you use the same content for all platforms or are there differences?

We often use the same content for our posts on Facebook and Instagram. For some time now, Instagram has been relying more and more on reels in addition to the classic images. And short videos are also gaining popularity on Facebook. That’s why we now additionally use recycled TikTok videos for both platforms. This is working very well. Of course, each platform has its own opportunities and challenges – we try to implement these as much as possible on an individual basis.

Are there any disadvantages to TikTok? If so, what are they?

A very significant disadvantage is actually the effort in the area of community management. When a post generates up to 2.1 million views, there is of course a lot more work for us – especially with regard to the comments. But to be honest, that’s just complaining at a high level ;).

Which topics are particularly successful for ORION on TikTok? And what is not working at all on the platform? Is there a recognisable pattern? When and how does a TikTok video go viral?

People follow people. That’s why everything that comes across as real and is close to everyday life works great: for example, life hacks that give tips on how a butt plug can also help out as a wine cork. Or sex education topics like “sex during your period”. Or taboo-breaking questions like “What is polyamory?” or “Is it true that hymens don’t exist?” As is so often the case, professionally produced content does not work at all on TikTok – no matter how beautiful it is. Posts with our ORION corporate video, for example, have made this abundantly clear.

What do you think a successful long-term content strategy for TikTok looks like? What are the biggest pitfalls for TikTok?

I can only repeat it again and again: Stay relaxed and authentic. Have fun with your posts and dare to tackle a taboo topic from time to time. You should avoid product-related promotional videos as much as possible. They are usually just as useless as professionally produced content. What you need is a lot of real content, without talking too much about your own products… A real challenge for many companies. For us, however, it’s easy at this point. There are so many educational topics and this means that we have no trouble finding ideas for new videos.

It is common knowledge that TikTok blocks words like “LGBTQ” and “gay”. How does this fit in with ORION’s diverse “#loveyourway” approach? Are there ways to get around these restrictions?

It’s a shame because ORION actually wants to break taboos and overcome shame – but unfortunately real opportunities don’t always exist. But because we are used to many restrictions from other platforms, we still try to be present as much as possible, to educate and to answer questions. In practice, this means that we can’t say orgasm, for example, but rather climax. We don’t say sex either, but rather, depending on the context, fun in bed or “KnickKnack”, a widely known German expression for sex, or something like that. In terms of visuals, we also censor a lot so that our videos don’t get blocked. I guess you could really say that we have learned to work in a very creative and flexible way.

In your opinion, is TikTok going to be the big thing for much longer or will no one be talking about it in a year’s time? And why?

There will always be new exciting apps from time to time. Some of them may even become so popular that they enter the mainstream.

But I still believe that TikTok will be a very exciting platform for many years to come – both for creators and for companies. The platform offers very simple editing features, no matter whether it’s filters or sounds, so that really EVERYBODY can join in. In addition, the attention people give TikTok is often completely different compared to other social platforms. This is because the app requires active use and cannot be used for scrolling through content at the same time as watching TV. So, people actually watch and not just browse – a real rarity these days. You can hardly wish for more for your content nowadays…